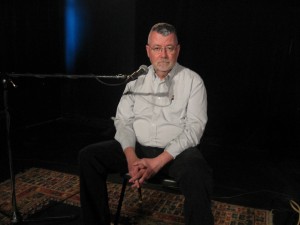 Accompanied by live music, Considérations recounts a myriad of images from my sixty-plus years: crossing the Southwest on freight trains, acid-drenched parties in Berkeley, California, awakening one morning on a tombstone in a Montreal cemetery, the slow days at home as house-husband, and an appearance on an Armenian morning television show.

Inspired by the work of French author, George Perec, and by the american poet Joe Brainard Considérations is constructed using a number of formal constraints. Each sentence in the monologue begins with the words: “Once I”, to which is added the past form of a verb and a memory. Each sentence contains only one verb. No verb is ever used twice. The verbs are amongst the 1000 most commonly used in the English language.

Created: 2015-17
Duration: 60 minutes or 3.5 hours (for the complete version without music)
Language: English 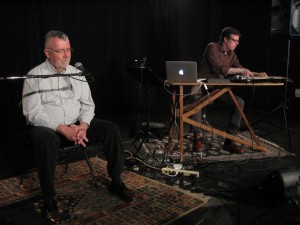 Montreal-based musician and composer, Alexander MacSween, has navigated many musical genres and participated in numerous dance, theatre and film projects. As a composer and sound designer he has worked with Marie Brassard, Daniel Brooks, Paul-André Fortier, Dana Gingras, Brigitte Haentjens, François Girard, Robert Lepage, and Public Recordings. He is active as a drummer and multi-instrumentalist in the fields of rock, electronic and improvised music, having played with Bionic, Foodsoon and The Nils, and in the duo Detention with Sam Shalabi, as well as in Martin Tétreault’s Turntable Quartet. Alexander has also created numerous solo musical performances and sound installations.

Considerations will be available for performances in 2020. For inquiries regarding performances please contact me here.

See a one-sheet for the production of Considerations here: