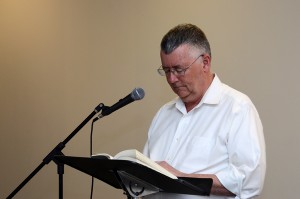 Each day for a period of one-year, from February 11th, 2010 to February 10th, 2011, I attempted to compose a poem for the project Points of Departure. During that period, 256 poems were completed.

The work completed in those 365 days was presented in a single continuous reading of 12 hours and 10 minutes. Every two minutes I read a poem corresponding to the given date and I remained silent for those days for which there was no text.